Que. 1 Who has been conferred with the ‘Santokbaa Humanitarian Award’ for 2018? 1.Kailash Satyarthi 2.A S Kiran Kumar 3.Baburao Hazare 4.1 and 2 5.1 and 3 Que. 2 Where will the secretariat of Global Preparedness Monitoring Board be headquartered? 1.Geneva 2.Vienna 3.Prague 4.Bordeaux 5.Oslo Que. 3 Which country initiated the digital health resolution adopted by the 71st … Read more Important Daily Current Affairs Quiz 31th May

1) Which of the following is/are correct about Hampi? It is located in Krishna-Cauvery basin It was the capital of Vijayanagara empire Cementing agent was excessively used by the kings for forts It is a part of HRIDAY programme a) Only 2 b) Only 1, 2 and 3 c) Only 1 and 2 d) 1, … Read more IAS PRELIMS REVISION TEST-HISTORY

RAS/RTS 2018 EXAMINATION IMPORTANT NOTES ART AND CULTURE/HERITAGE-RAJASTHAN THIS BOOK COVERED WHOLE RPSC RAS EXAM ART AND CULTURE SYLLABUS. Rajasthan has a rich heritage of its peculiar Art Culture & Architecture. Many of these art forms have survived through ages and are even part of present culture of Rajasthan. The architectural beauty of Rajasthan is … Read more Rajasthan : History,Arts,Culture,Literature : Useful For RAS,RJS,Lecturers Etc. 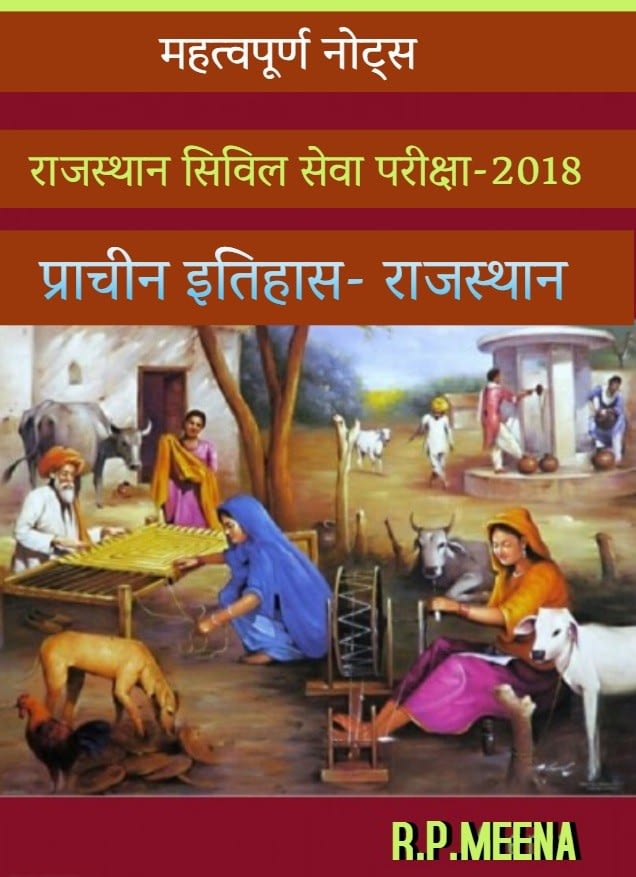 Many of you have been practicing a lot for your upcoming exams. Thus, to give you a head start we thought of helping you by bringing out daily current affairs quiz on PSC,SSC,Banking, Insurance,Railways and various other exams that will help you boost up your preparation a lot more. Moreover, this quiz contains expected questions … Read more Important Daily Current Affairs Quiz 24rd May

Que. 1 AYUSH is the acronym of the medical systems that are being practiced in India. Which among the following is not a part of AYUSH? Ayurveda Siddha Unani Naturopathy Vipassana Que. 2 Name the Indian charity that won an award at the Asian Voice Charity Awards 2018? GetVidya Jagriti Yatra Kalvialaya Helping minds Shantmanas … Read more Important Current Affairs Quiz 21th May 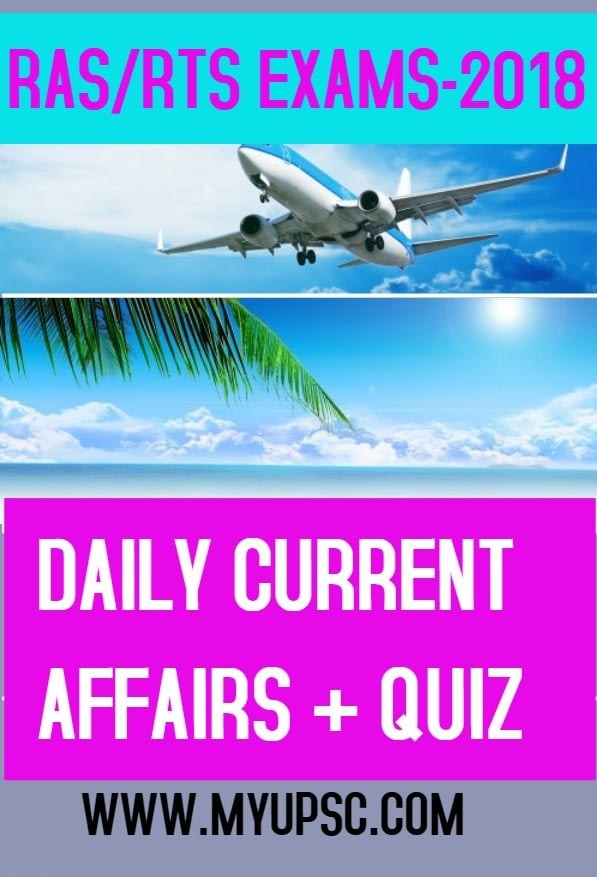 RAJASTHAN PPT I IN PDF RAS 2018 (CLICK HERE TO DOWNLOAD) Govt to restore Jhalawar’s Parsi opera theater Rajasthan government will restore the historical Parsi Opera Theater of Jhalawar considering its heritage and tourism value. The theatre, named Bhawani Natyashala, was constructed by the then Maharaja of Jhalawar Royal State Bhawani Singh in 1921. As the … Read more RAS/RTS 2018 HIGH YIELD SERIES-1

CLICK HERE TO DOWNLOAD FULL BOOK Consider the following statement and choose the right answer: It is an archaeological site of Ahar-Banas Culture located in Vallabhnagar Tehsil of Rajasthan. It is located on banks of Katar River. The site was discovered by V. N. Misra during a survey in 1962-63. This ancient site … Read more History of Rajasthan: Practice Solved Papers

Fourth phase of ‘Nyay Apke Dwar’ campaign started from May 1 The fourth phase of ‘Rajasv Lok Adalat: Nyay Apke Dwar’ campaign began in Jaipur district from May 1, 2018. As a part of the campaign, revenue courts will be set up at several villages and the grievances regarding land disputes will be catered at … Read more Current affairs Rajasthan:May 2018 Important Topics

SoCH awards is related to which of the following sector Community health Swachh Bharat Art & craft None of the above 2. Consider the following statements about National Biodiversity Authority It is a Statutory Body It is headquartered in New Delhi Which of the above statement(s) is/are correct? 1 only 2 only Both None 3. … Read more Current Affairs MCQ for UPSC/PSC Exams – 16 May 2018

The collision between a continental lithospheric plate and an oceanic lithospheric plate leads to formation of a) A Volcanic Island arc b) A chain of coastal volcanic mountains c) A mid-oceanic ridge d) A transform fault Answer: (b) The collision of a continental plate with an oceanic plate results in the oceanic plate being subducted … Read more Geography Quiz: Important for UPSC,PSC,SSC Exams

RAJASTHAN President launches several schemes in Rajasthan   The President of India, Shri Ram Nath Kovind, addressed a civic reception hosted for him in Jaipur, Rajasthan, by the state government on May 13, 2018.   The President appreciated the Government of Rajasthan for launching the ‘Bhairon Singh Shekhawat Antyodaya Employment Scheme’ and the ‘Sunder Singh … Read more 16 May Daily Current Affairs-Rajasthan

RAJASTHAN Food-grains yield in state stagnant for past decade The yield of food-grains in Rajasthan has remained more or less stagnant in the past decade, latest data released by the Reserve Bank of India (RBI) has revealed. The wheat yield in Rajasthan that was 3,175 kgs per hectare in 2008-09 had registered a dip in the … Read more Daily Current Affairs: Rajasthan 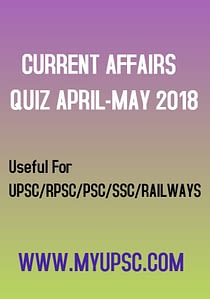 CLICK HERE TO DOWNLOAD Rajasthan government nod for construction on private hill land  In a first, the state government has given the go ahead for constructions on hills in private land in urban areas. The urban housing and development (UDH) department and the directorate of local bodies (DLB) have jointly framed the model bylaws for the same. The … Read more Daily Current Affairs+QUIZ: RAS/RTS And Other RPSC Exams

Madhya Pradesh Gets India’s First Smart Cities Control Centre In a major step towards realizing the centre’s smart city mission (SCM), the Madhya Pradesh government on Tuesday launched the country’s first Integrated Control and Command Centre (ICCC) for all seven smart cities of the state in Bhopal. What is ICCC: ICCC is a cloud-based Universal … Read more Daily Current Affairs for UPSC PSC & OTHER EXAMS

National security clearance policy The Home Ministry has given security clearance to more than 5,000 investment proposals, including for Foreign Direct Investment, in the last four years. Among the foreign countries, U.S., China (including Hong Kong), Mauritius, U.K. has received the green signal for the maximum number of projects at 10 each, followed by Germany … Read more Daily Current Affairs: UPSC PCS SSC Exams

1. D B Gupta is Rajasthan’s new chief secretary The suspense that extended till late night ,1983 batch IAS officer Devendra Bhushan Gupta was announced as the chief secretary of the Rajasthan. He succeeds Nihal Chand Goel, who retired on Monday. He is the sixth chief secretary in four years of the present BJP government. … Read more RAS Daily Current Affairs

Scroll back to top