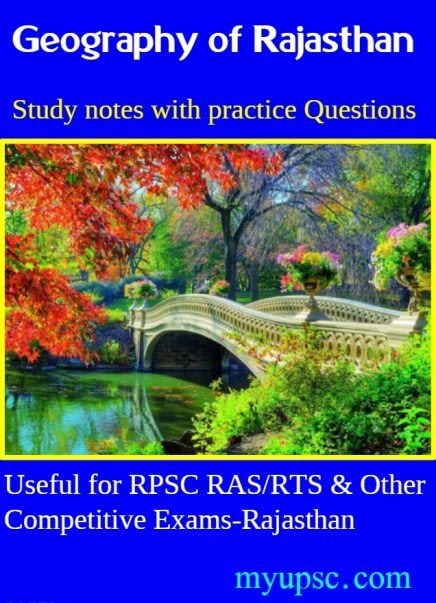 Rajasthan Geography RPSC RAS: It gives me immense pleasure in presenting the Geography of Rajasthan book, useful for the students of Graduate and the candidates appearing in Rajasthan Competitive Examinations conducted by RPSC and Rajasthan Subordinate Board, Universities and Government Departments. RPSC Rajasthan Geography Book

This book deals with the relevant features and topics of geographical landscape of Rajasthan in a systematic and comprehensive manner by the use of simple and concise language for easy and quick understanding. Varied topics covered are Physiography, climate, soil, livestock, minerals, Agriculture, transportation, Census, wildlife, drainage and other important topics by latest available data/diagrams. I hope that the readers will find this book user friendly and helpful in preparation of their examinations. I look forwarded to have the views, comment, suggestions and criticism from readers which would definitely help in further improvement of the Book.

Wish you happy reading and best wishes for the examinations.

Physiography of Rajasthan and Related MCQ

Climate of Rajasthan and Related MCQ

Download-Geography of Rajasthan via Easebuzz

The term “geography” comes from the ancient Greeks. In Greek, geo means earth and graphy means to write. Greeks developed an understanding of where their homeland was located in relation to other places and how people and environments were distributed by using geography.

Geography is the study of places and the relationships between people and their environments. Geographers explore both the physical properties of Earth’s surface and the human societies spread across it. They also examine how human culture interacts with the natural environment and the way those locations and places can have an impact on people. Geography seeks to understand where things are found, why they are there and how they develop and change over the time. Rajasthan Geography RPSC RAS

Man may grow rich in knowledge and intelligence, however much he may have overcome nature but ultimately he will have to depend on the materials supplied by Mother Nature for the development of his economic life.

The physical factors like topography, soils, geologic formation, climate and the available flora and fauna are the basic influences which lead to differences in land-use, cropping pattern, settlement and density of population and occurrence of minerals, water and power resources in different parts of the country.

Geography also became an important part of other academic disciplines, such as chemistry, economics and philosophy. In fact every academic subject has some geographic connection and the study where certain chemical elements such as gold or silver can be found. Economists examine which nations trade with other nations and what resources are exchanged.

Some people have trouble to understanding the complete scope of the discipline of geography because unlike most other disciplines, geography is not defined by one particular topic. The geography is concerned with many different topics—people, culture, politics, settlements, plants, landforms and much more. Rajasthan Geography RPSC RAS

What distinguishes geography is that, it approaches the study of diverse topics in a particular way. Geography asks spatial questions—how and why things are distributed or arranged in particular ways on Earth’s surface. It looks at these different distributions and arrangements at many different scales. It also asks questions about how the interaction of different human and natural activities on earth’s surface shape the characteristics of the world in which we live.

Geography seeks to understand where things are found and why they are present in those places; how things that are located in the same or distant places influence one another over time; and why places and the people who live in them develop and change in particular ways. Raising these questions is at the heart of the “geographical perspective.” Rajasthan Geography RPSC RAS

Geomorphology is the study of landforms and the processes that shape them. Geomorphologists investigate the nature and impact of wind, ice, rivers, erosion, earthquakes, volcanoes, living things, and other forces that shape and change the surface of the Earth.

Glaciologists focus on the Earth’s ice fields and their impact on the planet’s climate. Glaciologists document the properties and distribution of glaciers and icebergs. Data collected by glaciologists has demonstrated the retreat of Arctic and Antarctic ice in the past century.

Pedologists study soil and how it is created, changed and classified. Soil studies are used by a variety of professions from farmers analyzing field fertility to engineers investigating the suitability of different areas for building heavy structures. RPSC Rajasthan Geography Book

Hydrology is the study of Earth’s water: its properties, distribution and effects. Hydrologists are especially concerned with the movement of water as it cycles from the ocean to the atmosphere then back to Earth’s surface. Hydrologists study the water cycle through rainfall into streams, lakes, the soil and underground aquifers.

Climatologists study Earth’s climate system and its impact on Earth’s surface. For example: climatologists make predictions about El Nino- a cyclical weather phenomenon of warm surface temperatures in the Pacific Ocean. They analyze the dramatic worldwide climate changes caused by El Nino, such as flooding in Peru, drought in Australia and in the United States, the oddities of heavy Texas rains or an unseasonably warm Minnesota winter.

Biogeographers study the impact of the environment on the distribution of plants and animals. For example: a biogeographer might document all the places in the world inhabited by a certain spider species and what those places have in common. RPSC Rajasthan Geography Book

Oceanography is a related discipline of physical geography, focuses on the creatures and environments of the world’s oceans. The discovery and tracking of the Gulf Stream helped communications and travel between Europe and the Americas.

Scroll back to top