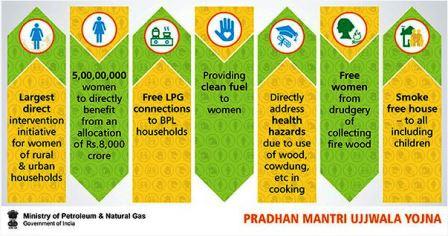 In our country, the poor have limited access to cooking gas (LPG). The spread of LPG cylinders has been predominantly in the urban and semi-urban areas with the coverage mostly in middle class and affluent households.

But there are serious health hazards associated with cooking based on fossil fuels. According to WHO estimates, about 5 lakh deaths in India alone due to unclean cooking fuels. Most of these premature deaths were due to non-communicable diseases such as heart disease, stroke, chronic obstructive pulmonary disease and lung cancer.

Indoor air pollution is also responsible for a significant number of acute respiratory illnesses in young children. According to experts, having an open fire in the kitchen is like burning 400 cigarettes an hour.

Air pollution kills more Indians than any other risk factor with estimates ranging from 15 to 20 lakh premature deaths annually. Although outdoor air pollution garners most public attention, it is well-known in health circles that pollution from chulhas is about half of the problem because people in households are directly exposed to such pollution.

It is less well-understood, however, that the two are linked: One of the reasons India has such bad outdoor air pollution is that nearly 200 million households are still burning biomass every day for cooking. Solving the household dirty fuel problem will also help reduce the outdoor air problem, although not solve it on its own.

Providing LPG connections to BPL households will ensure universal coverage of cooking gas in the country. This measure empowered women and protect their health. It will reduce drudgery and the time spent on cooking. It will also provide employment for rural youth in the supply chain of cooking gas.

This is the first time in the history of the country that the Ministry of Petroleum and Natural Gas would implement a welfare scheme benefitting crores of women belonging to the poorest households. Last month, the Pradhan Mantri Ujjwala Yojana (PMUY) completed two years of operation.

About 75 crore Indians, especially women and girls, are exposed to severe household air pollution (HAP) from the use of solid fuels such as biomass, dung cakes and coal for cooking. A report from the Ministry of Health & Family Welfare places HAP as the second leading risk factor contributing to India’s disease burden.

According to the World Health Organization, solid fuel use is responsible for about 13% of all mortality and morbidity in India (measured as Disability-Adjusted Life Years), and causes about 40% of all pulmonary disorders, nearly 30% of cataract incidences, and over 20% each of ischemic heart disease, lung cancer and lower respiratory infection.

Achievements of the PMUY:

Under the scheme, now 8 crore LPG connections are to be provided to BPL households. The identification of eligible BPL families will be made in consultation with the State Governments and the Union Territories.

Pradhan Mantri Ujjwala Yojana (PMUY) aims to safeguard the health of women & children by providing them with a clean cooking fuel – LPG, so that they don’t have to compromise their health in smoky kitchens or wander in unsafe areas collecting firewood. The ambitious scheme also laid down a condition — that the LPG connections will be issued in the name of the women of the households.

Encouraged by the rapid release of connections, the central government revised the target and scope of the scheme to eight crore connections by March 2020.

Under the scheme, the union government bears the connection cost of ₹1,600 per connection, and each household pays about ₹1,500 for the stove and the first LPG cylinder. Centre to raise allocation for the project to ₹4,800 crore

Another reform that equally deserves applaud is Give it scheme. It is truly a social revolution that is happening in the country. More than one million people have given up there subsidy voluntarily since the “Give it up” initiative started.

With this it is possible that government can use these voluntary resources for synergising other schemes that are cash strapped or require more funds.

The DBT scheme which aims to directly transfer the subsidy to the beneficiary is another great initiative that is truly innovative and successful.

Linking the beneficiary’s bank account to his Aadhar number has prevented pilferage, avoided middlemen, and target subsidy to the original beneficiary, India which closely spends nearly 4-5 percent of its GDP in giving subsidies; the DBT scheme has been revolutionary in channelizing these precious resources to empower people.

Truly smokeless kitchens can be realized only if the government follows up with measures that go beyond connections to actual usage of LPG. This may require concerted efforts cutting across Ministries beyond petroleum and natural gas and including those of health, rural development and women and child welfare.

Government needs to re-look at their connection focused approach, and should ensure adequate provisions for affordability, availability, and accountability.

This will propel PMUY to achieve the desired objective of not only disbursing connections but making the LPG sector a real contributor to overcoming this deep-rooted challenge affecting energy access, health, and gender disparity. There needs to be a synergy in the Gas connection with the Electricity connection.

It is welcome that the government has recognised the importance of clean cooking energy with the launch of this mammoth scheme. However, we need to go beyond subsidising connections and fuel costs and focus on issues of cash flow, awareness, availability and administration. Only such a comprehensive approachwill help poor households have a better life.